Red Bull Stratos Behind The Scenes

I picked up a copy of Al Reinert's remastered For All Mankind from The Criterion Collection this week. As a huge fan of anything space related , I was really impressed with the Datacine inter-positive release print transfer to the high-def Blu-ray format. Equally impressive was the supplemental material and all the archival still images available on the disc. However, this is not another review of that film, but it did give me some thought about revisiting my behind the scenes look at a huge project I was involved with last year: Project Stratos.

Beginning in July of 2011 at Cape Canaveral, Florida, where we ran tests of our long range optical tracking equipment on the final Shuttle launch (STS 135, Shuttle Atlantis) and ending on October 14th 2012, deep in the New Mexico desert with Felix Baumgartner's historic world record space jump from the Stratosphere (127,851ft.), I had full access to the project, documenting every moment with my cameras. With thousands of images taken, I even have images of paint drying on the space flight components!

Red Bull Media's live YouTube broadcast of the event broke the internet live-streaming world record with over 8 million simultaneous viewers. In 2013, Red Bull Media and Flightline Films were honored with an Emmy Award for "Outstanding New Approaches Sports Event Coverage." Knowing Red Bull Media's commitment to delivering a first-rate broadcast and subsequent documentary film, I was really focused on capturing the unsung elements that might have gotten lost or overshadowed by the sensational moving images.

For the most part, the following gallery images are in relative chronological order. During the course of the project there were 5 successful launches: 2 Unmanned Balloon Flights (UMF1 & 2) and 3 Manned Ballooned Flights (MBF1,2 & 3). Each launch had its own specific mission, in proving itself during the critical path forward, for the final mission to succeed, much like the series of Apollo launches leading to the Moon landing. I've chosen 180 images that best tell the story from an alternate perspective, including the logistics of travel, remote location setup, elements of weather, venomous rattlesnakes & scorpions, magnificent sunrises, distant Jupiter and its moons, capsule components, telemetry, mission control and "Jumper away!" as captured by my Canon 5D mated to an Astro Tech Ritchey-Chrétien 10 inch optic.

From a human perspective, perhaps the most entertaining of these images are of Col. Joe Kittinger's insistence on getting his hands dirty and later, of Felix's reflective visor folding training.

First mentioned; Joe Kittinger is one Tough-as-Nails, No Nonsense retired United States Air Force Colonel. At the age of 84 his contribution to the project was invaluable. Not only as a technical advisor, but as a mentor to Felix. I would constantly see Joe, hustling around the launch facility performing one task after another. My thoughts were always "Can't someone help Joe out with that task?" Yes, there was plenty of help, but Joe wouldn't have it that way, he had to have his hands in the mix at all times. The images of Joe removing and carrying away the capsule's access panels are priceless. I have nothing but respect and high admiration for him. If you ever run into the Colonel, just thank him for his enlisted services - enough said. [Images 82 - 85]

Capsule Crew Chief, John Wells (Sage Cheshire Aerospace) teaches Felix how to strategically fold the reflective shield which he would use to "visor-out" the Sun's extreme light rays while on the long accent up to space. Now, we all have these types of collapsible devices in our automobiles, but this one was really huge and required a few practice attempts to accomplish the task; now factor in the pressure suit gloves. [Images 88 - 91]

Some final thoughts as I look back: Since 1947, there's been a debate as to whether or not a real live alien ever landed in a farmer's field outside of Roswell, New Mexico. Being that Felix Baumgartner is an Austrian national, I can definitively tell the world that an alien did in fact landed there; I saw it with my own eyes! 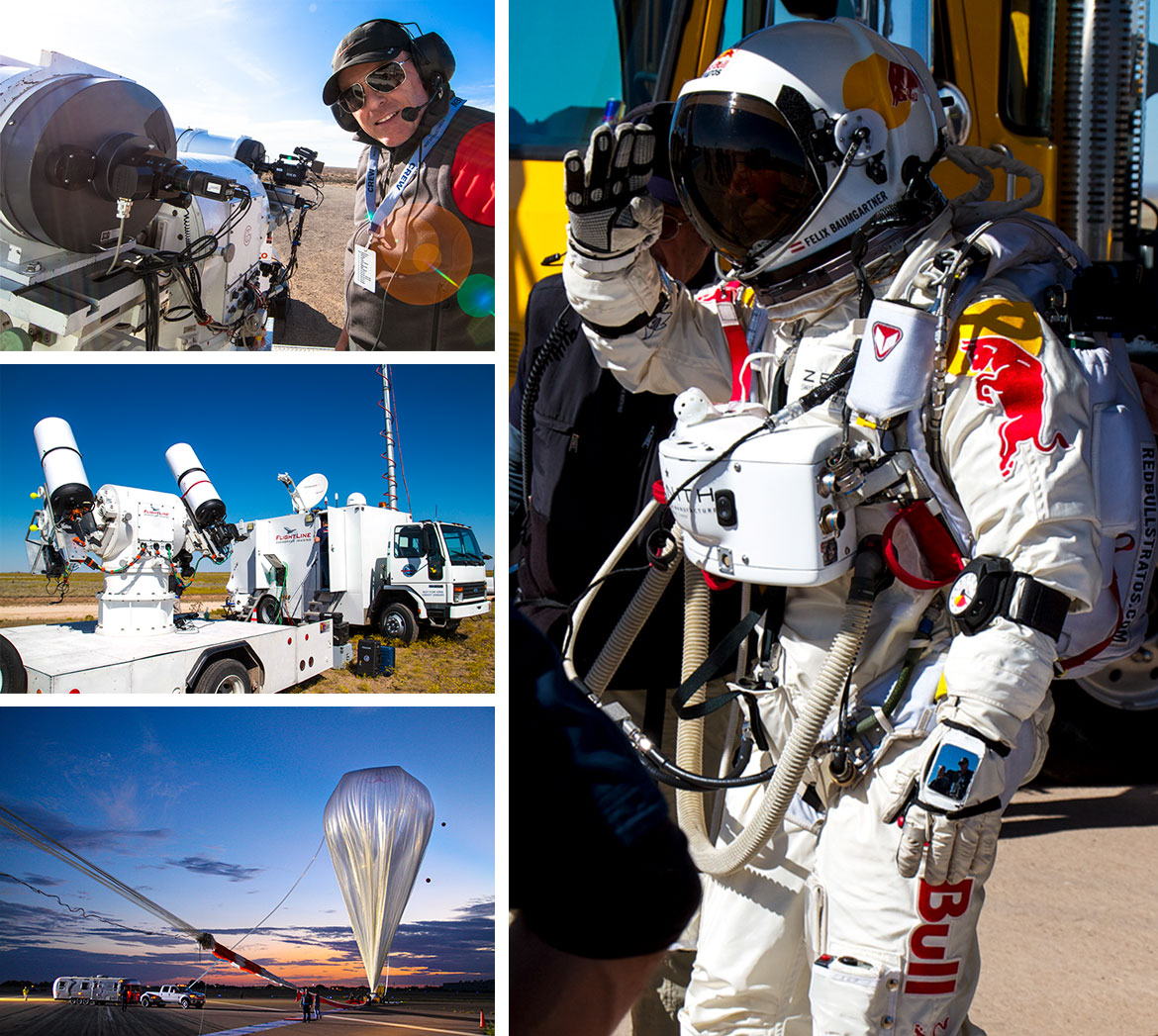