Who doesn’t love vintage Las Vegas? Unfortunately, most of these vestiges have dissapeared over the past half-century, as repeat visitors demand something new each time they return. Raze the old to make room for the new. Las Vegas is slowly becoming more proactive at preserving its past, but much of it requires removing the elements of yesteryear from their original havens and relocating them to surrogate locations. Relocation is fine, but there is no substitute for experiencing these attractions as they were originally designed and constructed. My recent interior design, photography project, for the El Cortez Hotel, is a great case study example.

In the early 1960s, Las Vegas casino mogul Jackie Gaughan acquired the El Cortez hotel; the hotel was originally constructed in 1941. With business progressing over the years Gaughan expanded the hotel’s room occupancy by adding a new guest tower in 1980. Atop the new tower Gaughan built his private residence, now famously know as the “The Jackie Gaughan Suite”. With his wife’s passing in 1996 and his in 2014, the private residence has been off limits with the exception of a few select hotel V.I.P.s - until now. Recently, the hotel introduced the suite to the public for the first time.

In addition to photographing the newly remodeled Tower guest rooms, the hotel asked me to capture the Jackie Gaughan penthouse suite. Now, I have been in more Las Vegas suites, villas, mansions, call them what you want, than one can count, but there is something special about entering a space that has not been updated nor remodeled since the day the keys were handed over. Additionally, the space has been meticulously groomed for the past forty years. My first thought upon entering was the furniture had to have been staged; it could not actually be the original. Every detail and appointment, right down to vintage closed circuit surveillance camera system and the immaculate kitchen appliances are original and completely intact.

Beginning in the late evening, I spent approximately eight hours in the penthouse capturing the unique spaces, finishing just before sunrise. The main living space, beyond the hand-crafted solid wood double entry doors & classic foyer entry, comprises the conversation area, dining room, lounge pit and full-size built-in bar. At opposite ends of the grand living area are bookend balconies, each providing spectacular 180 degree views of downtown below and the incredible Mojave Desert horizon in the distance. 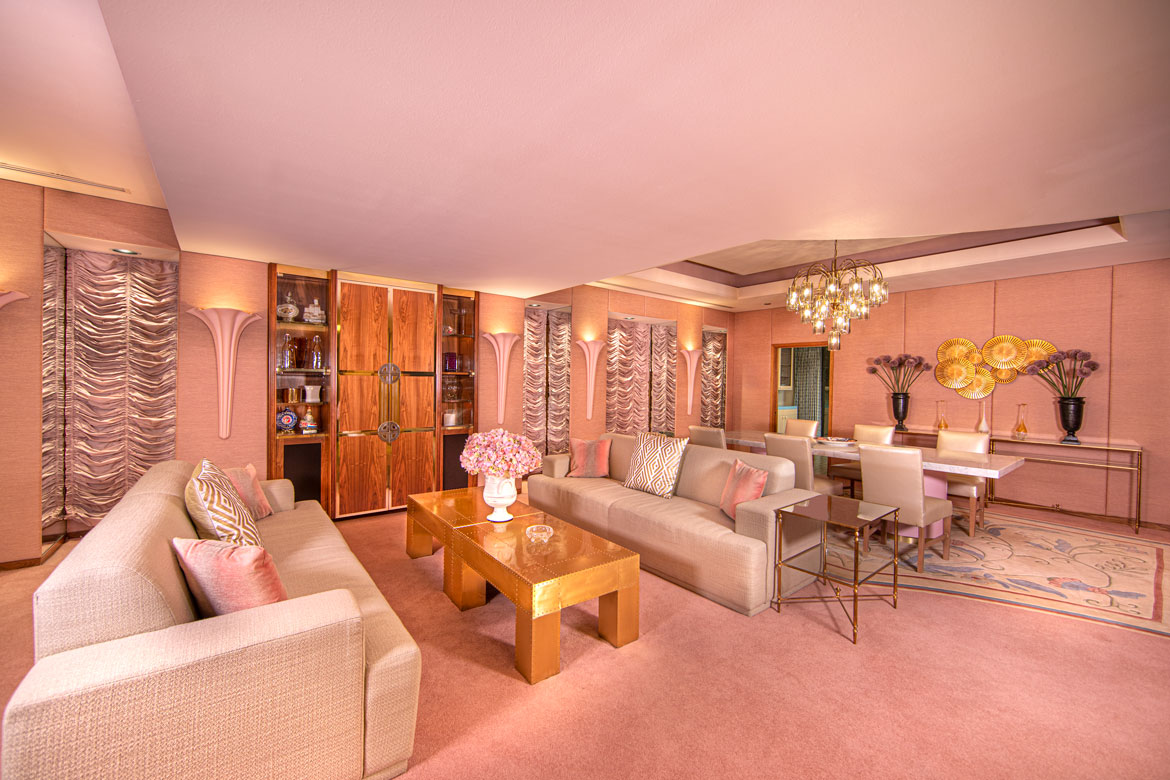 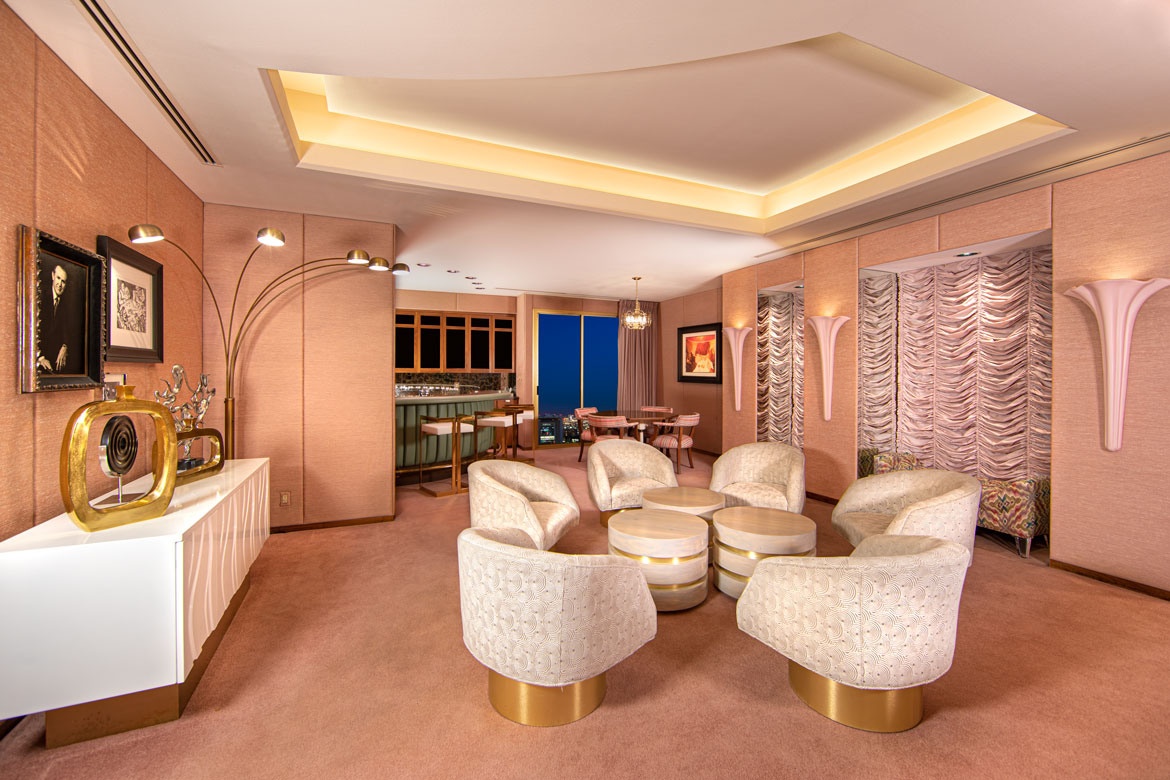 For photographic lighting, I used a combination of multiple Kino-Flo fixtures and 500 watt/second strobes to establish symmetry in the lighting, thus providing image depth and allowing me to bring out the important details in the shadows. For many of the unique reflective and raised surfaces, I took the extra time applying relief lighting, to enhance their appearance in the final image. Employing flat, unidirectional lighting never provides desired results. It is always important to accentuate elements in the scene, as the eye actually sees them.

The beauty of shooting digitally, opposed to using film, is the advantage of repurposing the lights (layer masking in post) rather than having to travel in tow with an entire lighting crew. With film you have to light the entire scene like a movie set, requiring countless lights and exposed electrical stingers. 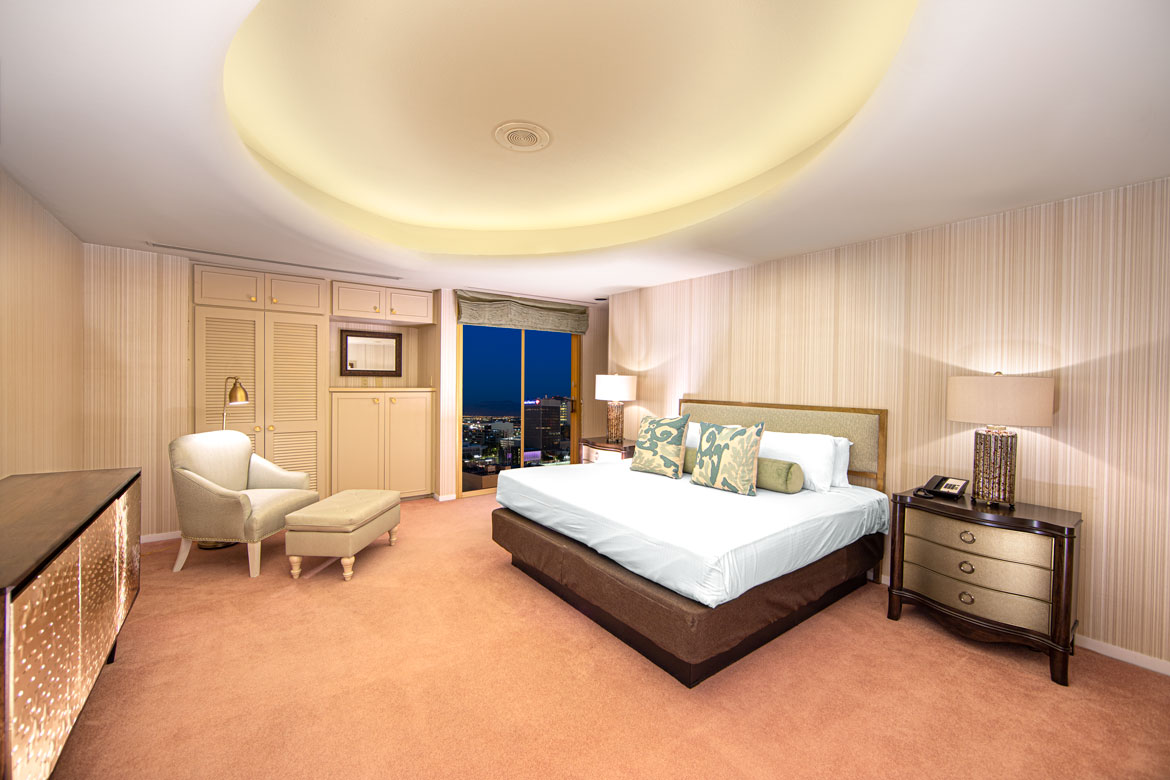 The master bathroom is something to behold. I would have to guess the bathtub was custom manufactured utilizing melted Neapolitan ice cream, with its bronze-cast fixtures made by a little old man in the country of origin - Italy. Not particularly in-style today, but in its time…brilliant, nonetheless. How did I capture those images above without the mirror reflecting moi, my camera, tripod and photographic lights? Answer: I get paid for those tricks!

From The Kitchen Balcony: Twilight Before Sunrise