The Future is Here

By comparison to today’s standards of advanced, high-speed, 4k+ resolution, HDR, ultra-compact, digital movie cameras, the Bell & Howell Zoomatic Director Series 414 8mm home movie camera is a behemoth relic of decades past. For most vintage movie camera collectors, the 414 makes a great conversation piece, moreover, a lethargic paperweight. However, when first introduced to the public in 1960, the 414 design was an expensive and much desired consumer-based camera, for capturing home movies on-the-go. For the Cold War nuclear family, with discretionary income, the 414 was a wise investment, for preserving memorable family experiences, for the future to come.

So, let’s go ahead and overload that Ford Galaxie Country Squire station wagon, sending the rear bumper to the asphalt while raising the headlights to the stars, with waxed canvas pup tents, army surplus sleeping bags, the all-steel outdoor kitchen, a Coleman galvanized metal ice chest, plenty of Coppertone suntan lotion, Off! insect repellent, tiki torches, the family dog, both kids (optional) and head out on the road, to shoot a home movie, for an adventure of a lifetime.

If unsure how to securely tie down the aluminum canoe to the station wagon’s roof, using the proper Boy Scout knot, do what everyone does…tie a redundancy of elementary knots and bring a Buck Knife, to cut it free once at camp.

What's in the Box?

I recently purchased my Bell & Howell 414 for less than the cost of shipping, with little expectation that it might actually still work. My thought was for display purposes only. I had not even considered if fresh stock 8mm film was even available, let alone options for development and digital scanning. The camera actually came with the original receipt from Metro Photo, in New York City. In 1960, the 414 sold for $160.00. Adjusted for accumulative cost of inflation, the 414 would sell today, for $1,535.00.

Once arrived and the proverbial “How does this thing work?” tinkering session passed, I quickly determined that it may, in fact, be capable of capturing moving pictures, after a half-century of dormancy. Because of its purely mechanical, spring-wound, robust all-metal design, why wouldn’t it still work? And let’s not forget where it was made – in the U.S.A. For comparison, do you think your fancy Apple watch will still work in the year 2082? Answer: Nope!

After reading through the Bell & Howell 414’s operating manual and accepting that the camera was no longer under the manufacturer's one-year guarantee, to be “free from imperfections in both material and workmanship…”, I decided to source some 8mm film online. My search results took me to the Film Photography Project website – a very cool group of film lover aficionados who had just what I needed. I decided to roll with a classic look and purchased their Cine 8 40 ISO black & white transparency film. Yes, transparency film. Professional movie cameras back in the day ran negative film stock. Once developed, a fine-grain intermediate positive was produced from the original negative, for editing and duplicating print release purposes. Knowing consumers were not going to go through this lengthy and costly process, they made 8mm positive transparency film, so the same film used in the camera could simply be developed and projected in the family’s living room. For “Project Death Valley”, I specifically went with black & white film rather than color. Yes, it’s easy to strip the color out of color film, but I was looking for authenticity

8mm film comes in a variety of options, so it’s important to know what your specific camera uses. The Bell & Howell 414 takes Double 8 film. What’s that? Double 8 is actually 16mm film cut at twenty-five-feet, then preloaded on a spool. Properly loaded, one-half of the film’s width is exposed when you run the first twenty-five feet through. The take-up spool is then removed from the lower camera spindle, flipped, reloaded back to the upper spindle and the other half is run through. After the development process, the film is split right down the middle and spliced together, giving you fifty feet of continuous film to project against your Da-Lite screen. Really smart considering the era in which it was designed. So, you might be asking why not just order 16mm film? The answer is because Double 8 film is specially perforated, cut at twenty-five feet and placed on a proprietary, center registered, spool that prevents it from being loaded incorrectly inside movie camera. Other 8mm home movie camera models ran Double 8 magazines, high capacity one-hundred-foot spools and then the Cadillac of all home movie films, the cat’s meow – Super 8 film.

From today’s perspective, where we simply tap on the video icon of our smartphones, allowing our device’s autonomous intelligence to make decisions on its own, the 414 was a somewhat complex movie camera to learn. You had to have some basic photography knowledge, to fully understand how the camera worked. 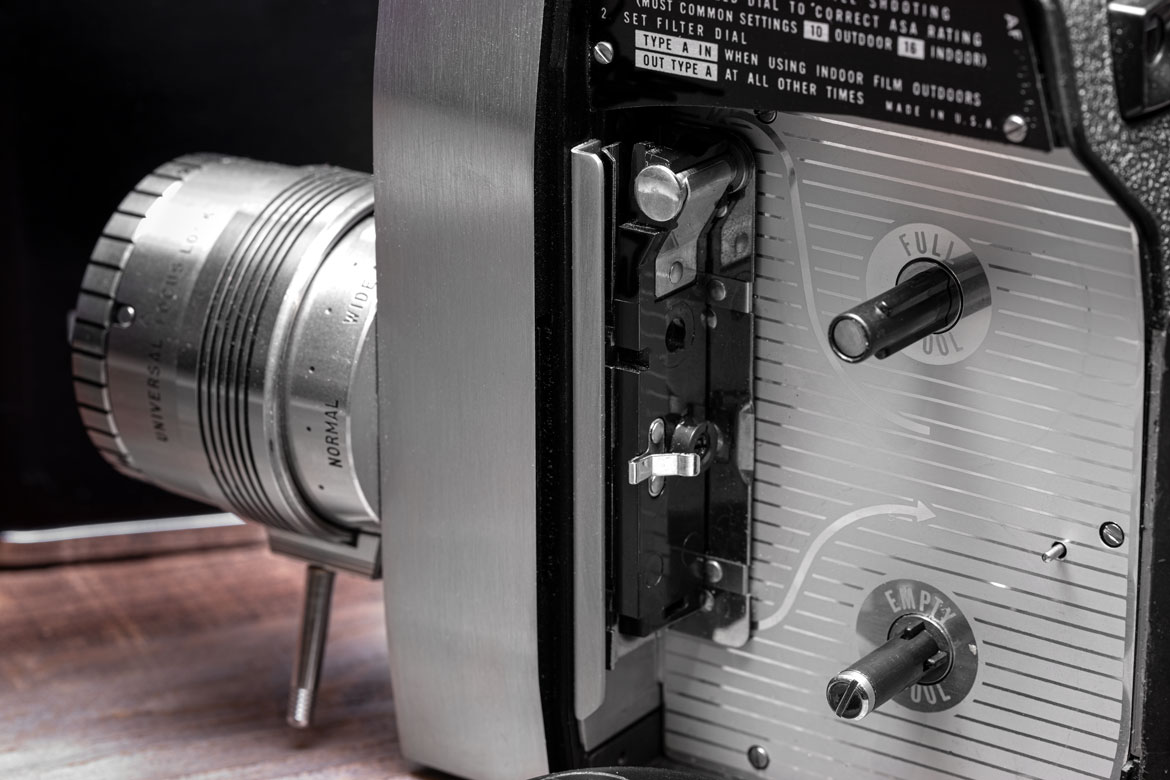 Basic Operation of The Bell & Howell 414

To begin, the Bell & Howell 414 does not operate on batteries, so it needs to be hand-cranked, which creates internal spring tension, for reciprocating power. The optional 414P model, with Power Zoom, also uses the tensioned springs to drive the lens’ zoom function, from the two momentary button controls on the top of the camera – brilliant!

When out camping in the middle of nowhere and your friends bust out their clever, solar powered smartphone chargers, laugh away while hand-cranking your 414 camera.

Loading film is a bit tricky at first, but once you learn the pathway it’s a no-brainer. The hardest part, I found, was threading the film leader into the center of the take-up spool. To be fair, I was using a film changing bag, wanting to maximize as much unexposed film as possible. The operating manual instructs you to do this in low-light, but I wanted to see if I could get an extra foot or two, which I did.

When originally introduced, ISO film speeds were available between the 10 to 40 range. Why so low and slow? Consider a few factors for this decision.

First, the actual matted (projected) frame size of 8mm is extremely tiny (3.7mm x 4.9mm), so when projected on a screen, from let’s say 15 feet away, film grain size will have an impact on the image quality when enlarged. For this reason alone, the benefit of a low ISO film is understood.

Second, the normal “RUN” speed for the Bell & Howell 414 is fixed at 16 frames per second, running a 180-degree shutter angle and a 1/35 second shutter. At 1/35 shutter, coupled with the relatively fast Varamat ƒ/1.8 lens, a low ISO film works out nicely. ISO 400 film is available, but the only way to use it outdoors would be by taping a 3-stop neutral density filter to the front of the lens; the fixed lens is not threaded to accept filters. Using ISO 400 film indoors is fine, but be sure to read the light and set the 414’s aperture manually – you will need to trick the camera.

For those of you who remember having to choose between Daylight or Indoor (Type A 3400K) color temperature film there’s really only one option available today – Daylight. The Bell & Howell 414 has a built-in “Type A” filter which should be placed in the “out” position when exposing Daylight balanced film. It was purposeful back in the days when exposing Indoor film, balanced for Tungsten lights, outdoors. When exposing black & white film, the filter servers little to no purpose. If you are old-school and remember placing Color Temperature Orange gel (CTO) over 5600k photofloods, or Color Temperature Blue gel (CTB) over 3400K photofloods, to correct for the film type loaded, the filter performs this reciprocal function internally.

This may sound like auto-focus, but it’s based on the elementary photography rule of depth-of-field. Depth of Field (DOF) is the area between the nearest point in focus, to the furthest distant point in focus. DOF is controlled by the lens’ aperture, or iris. Ever wonder why your eyes squint to bring things into focus? By reducing the amount light entering your eye, via the iris, your eyes are able to see clearer, because the DOF has increased. The wider the aperture, the shallower the DOF. The inverse is true – the narrower the aperture, the deeper the DOF.

By understanding the Sunny 16 rule, if you are filming outdoors under full sunshine the camera will automatically select a narrow aperture, likely ƒ/16 or ƒ/22, so by setting Focus Lock at its predetermined focus distance of approximately twenty-two feet, you will obtain ample DOF. For closeups, it’s recommended to come off the Focus Lock, estimate your subject’s distance and apply manual focus.

The Bell & Howell 414 is equipped with a built-in light sensitive Selenium photocell which averages the entire scene’s light and automatically controls the lens’ aperture for proper exposure. Selenium cells can last for decades, if they are not subjected to a constant light source. If you buy a 414, be sure to ask how it was stored. A camera that has been stored for decades on a shelf is likely to have a burned-out cell, as years of continuous ambient light may have affected it. A smart move is to buy one that comes with the original travel case. In theory, this would indicate that it was protected over time from light. However, do not fret if your 414 has a dead cell…you just have to read the light, use an old fashion light meter, or download a free light meter app for your smartphone. Manually setting your camera will actually provide more accurate exposures. Now you’re a bona fide Director of Photography! 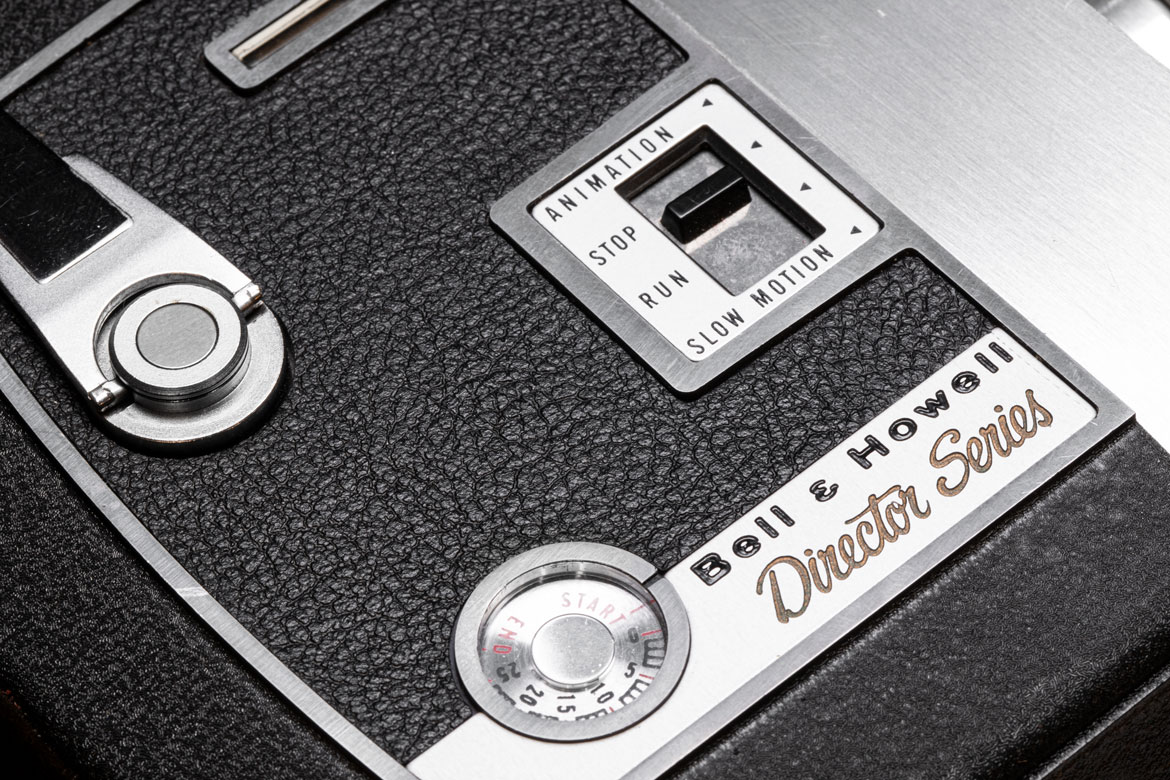 Well, my friends and I couldn’t get the old Country Squire running (something to do with the carburetor), so we decided to play it safe with our modern-day, computer-controlled, multi-port fuel injected wagons, ultra-light camping gear, Yeti coolers, satellite communications equipment, SPF 72 sunscreen, LED lamps and headed for the backcountry of Death Valley, CA, to fix that ol' outhouse wooden door and a time-honored visit at U2’s fallen Joshua Tree. To make the Bell & Howell 414 feel not-so-lonely, we did slightly weigh down the rear bumper by loading our Lodge cast iron Dutch oven. At least now, the 414 and pot could converse about the good old days.

Although I had the film developed & scanned by FPP and knew I could easily edit the short vignettes in Adobe Premier, iMovie or other, I wanted to be an originalist and force us to think the timeline through; being mindful of the places we wanted to capture, calculating the amount film remaining and leaving just enough footage for the final scenes at The Joshua Tree.

I am happy to report my expectations were GREATLY surpassed: grainy, dust everywhere, variable contrast & density issues, fluctuating exposures, vertical lines etched into the film’s emulsion via the pressure plate, light leak transmissions from the sprocket holes…everything you could hope for, from a sixty-year-old home movie camera. I would not change a thing!

480p Default: Select the GEAR icon to adjust the resolution.

150 Miles South, Into the Heart of the Mojave Preserve

As a follow up to the previous review, I wanted to give Film Photography Project’s Cine 8 Color Negative ISO 40 film a test, along with a thorough cleaning of the 414. The subject this time: Springtime in the Mojave Preserve.

Unfortunately, the 414 was designed using cost saving techniques, which does not allow the lens to be removed easily. Yes, it can be removed, but there’s no quick-release screw or bayonet mount, for this procedure. The camera would need to be carefully disassembled on a workbench and with fingers crossed, hoping the small springs and tiny parts will find their way home safely. Summary: don’t do it. Just get in the film gate the best you can, with lint-free tissue, and an appropriate cleaning solution.

The end results were quite the contrast from the black & white film. Which is better? Neither, they’re both unique to themselves. For juxtaposition, I also shot a roll of Rollei Infrared on my Leica M2 and peppered the stills into the final edit.

480p Default: Select the GEAR icon to adjust the resolution.